There is beauty in simplicity; simplicity is the ultimate form of sophistication. And that is exactly what Mila represents. It is about subtracting the obvious and adding the meaningful.

This Mercedes Benz W115 also known as a 230.4 really needs no introduction as it has been featured and captured by countless people in the mother city. The owner of this beauty is none other than Tauriq Ajam, founder and owner of the very well known brand Capestance. This feature is however our chance at Southernstance to showcase this lovely piece of machinery through our lens. Tauriq was always one that stood out above others in the stance scene.

Along with his team they’ve built this brand from the bottom to become probably one of the most recognized names within the stance community here in SA. Their dedication and eye for quality has always been one of the things I admired most about them and something I’ve come to strive towards. With that being said I present to you all Capestance’s very own game changing ‘Mila’ as Tauriq decided to name her. According to Capestance themselves this car has become the symbol of passion, love and motivation for their brand.

As I sat in front of the computer busy with the post processing I was constantly trying to come up with catchy names for this feature and thinking of how to go about it to make this a worthwhile read to the point where I almost went blank, until it hit me.

The man himself doing his thing behind the lens
– and how about that tuck though!!!

There is beauty in simplicity; simplicity is the ultimate form of sophistication. And that is exactly what Mila represents. It is about subtracting the obvious and adding the meaningful. In their feature Tauriq stated that legit wheels are the way forward which emphasizes my point.

Not all people can afford Air Suspension or Original wheels which is a pity, however the fact remains that you will have much more appreciation for something of that quality and standard, its a fact of life.

So if you are serious about obtaining that level of quality and want people to look at your car with that same appreciation and admiration you will find a way, unless your happy with replica wheels or 10 other guys having the same wheel as you though.

With the stance scene here in South Africa growing as quick as it is people are forced to try and stand out above the crowed pulling of some crazy stunts with some of them succeeding but to most of their demise. Tauriq has taken a step back and did only the basics, which has paid off greatly in my personal opinion and in the end resulted in an aesthetic work of art. His mindset and approach to this build was key in the outcomes of Mila. It is exactly that which made this one of the most iconic cars in South Africa even and on an international level as it keeps popping up on blogs such as StanceNation and Canibeat etc.

Having started later than most of the groups and pages we are still fairly unknown but none the less he gave me the opportunity to shoot his Benz, Tauriq infamously known for arriving late at shows and shoots decided that the day of our shoot would be a great day to live up to this name ha-ha, so we started our shoot a bit later than I would’ve liked but it was worth the wait. We got some awesome shots in a short space of time and we hope that we did it justice. This is also just so by the way our first post to our new blog and I could not think of a better car to start it off with. 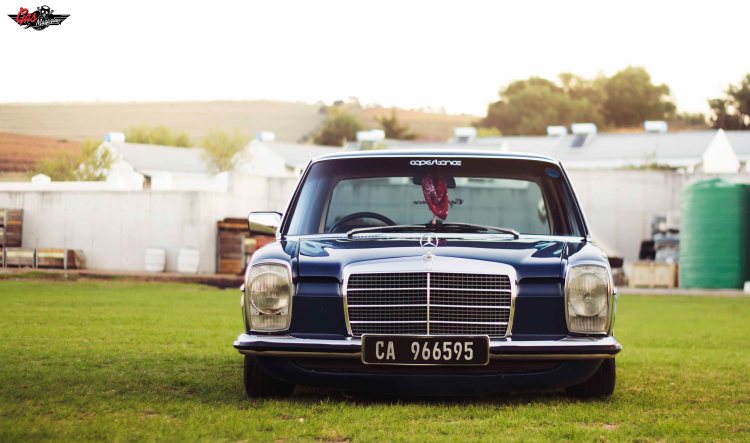 Now some more about Mila, the bodywork is still original and in pristine condition as if it just rolled out of the factory yesterday, when you look at it you would not think it to be a 37 year old car.

auriq’s touch amounted to him adding Air-Lift Performance bagged suspension to “slam the shit out of it” The car still runs on Analogue toggle switches, but Tauriq says the setup will be changing in the near future. We all love to buy our girls a sexy pair of heels or sneakers and Tauriq decided that the right set for his girl would be a set of 15×8 3pce OZ Vegas splits, which in my eyes are a perfect fit. It’s one of those wheels when done proper you can’t go wrong with. The interior is also still original with no faults what so ever.

Cleaner and smoother
than a baby’s bottom.

Anyway I feel that I’ve covered the lot and would just like to end off by saying thank you to Mr. Ajam for the opportunity once again, to Matthew (Casual Society) for my free sticker ha-ha.

Check out their website at .capestance.com
for a more in depth look at the build and origins of Mila.